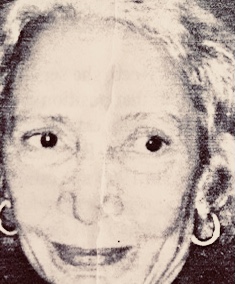 Bernice Just (j. 1953; d. 2001) is referenced in Mark Morrison-Reed’s “Darkening the Doorways: Black Trailblazers and Mixed Opportunities.” She was hired as the director of religious education in 1957 and served in that position under A. Powell Davies and Rev. James Reeb until her resignation in 1966, making her the first person of color on the church’s professional staff.

John Manwell, then chairman of the Board of Trustees, regretfully accepted her resignation and paid Just the ultimate compliment in a letter dated August 8, 1966: “Mrs. Just has been associated with the School of Religion for more than a decade and during the past nine years has been responsible for many hundreds of Unitarian children. She has discharged those responsibilities with skill and devotion. Her personal graciousness and patient willingness to give her best, despite conditions which were sometimes extremely difficult, have endeared her to us. Her genuinely warm acceptance of children coupled with her remarkable insight in discovering and inspiring a series of unusually qualified staffs of teachers, have made an immeasurable contribution to the life of All Souls Church.”

After leaving All Souls, Just accepted a position as project director for the Reading is Fundamental Fund Committee, a new experimental volunteer project she established with Margaret McNamara, wife of Robert S. McNamara, then president of the World Bank, for the purpose of providing books to elementary schoolchildren in DC.

A couple years later, Just organized the Washington Pretrial Justice Program under the auspices of the American Friends Service Committee and became its director. While there, she published “Under Arrest! What Happens Next?” and a groundbreaking report titled “Waiting in Jail,” which documented the inequities in the bail system and the high number of black and indigent pre-trial detainees who were unable to make bond. To this day, this report’s findings and Just’s Howard Law Review article, “Bail and Pre-trial Detention in the District of Columbia: An Empirical Analysis,” 17 HOW. L.J. 844, 850 (1973) are widely cited in articles and law review journals for the importance of bail reform and pre-trial release.

She served on many professional and civic organizations and boards, including the ACLU and the DC Public Defender Service, and was a frequent witness before Hill committees in support of the speedy trial bill and against the death penalty, and in support of a prisoners’ bill of rights.

Just received bachelor’s degrees in sociology and psychology from Howard in 1940, and then returned to Howard for a master’s degree in religious education in 1965, which ironically was awarded a year before leaving All Souls. Based on numerous articles referring to her as a lawyer, it is speculated that she also earned a law degree from Howard.

Get all latest content delivered to your email a few times a month.