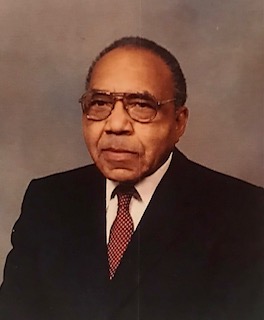 Colonel Clarence M. Davenport (j. 7/1964; d. 2007) and Yolande Davenport (d. 2014). Davenport was an All Souls Board member (1976) and a member of the Beckner Committee (2005). He was also a music lover, an award-winning amateur photographer, and the sixth Black graduate of West Point. Davenport died of pancreatic cancer at the age of 89.

Throughout his time at the Academy, Davenport faced tremendous challenges. He roomed alone and endured four years of rigid “silencing” by his fellow cadets. No other cadets talked to him except on official business and no other cadets would sit by him, even during chapel services or meals in the mess hall. And no one took his hand at the end of his plebe year, when it was customary for upperclassman to exchange handshakes. It was just as if he didn’t exist.

Nonetheless, in January 1943, when his name was called to step up and receive his diploma, Davenport received a standing ovation from members of his class. That moment was captured in Frank Capra’s 1944 documentary, “The Negro Soldier,” which the Army seemingly used as propaganda to convince Black men to enlist.

Only five of the 17 African Americans appointed to the military academy in the previous 68 years had graduated, and two Black men who enrolled in the fall of 1940 left within two weeks because of the hostile culture. “They put feces in his bed. They put feces in his shoes,” according to Davenport’s daughter, Elizabeth Davenport McKune.

Col. Davenport served in the South Pacific during World War II and was later sent to the University of California at Berkeley by the Army, where he received a master’s degree in bioradiology in 1954. He also graduated from the Army’s Command and General Staff College and the National War College. In the mid-1960s, he received the Legion of Merit for his command of the 10th Artillery Group, 32nd Army Air Defense Command in Europe, and retired from the Army in 1972 as a full colonel. After Colonel Davenport left the military, he completed all but his dissertation for a doctorate in educational administration at George Washington University. He retired in 2000 as Howard University’s administrative coordinator in its Materials Science Research Center of Excellence.

This tribute from All Souls member Bob Bonner was posted on Colonel Davenport’s memorial website:

Dear Mrs. Davenport,
My wife and I knew Mr. Davenport only through conversations at All Souls Church and by winning his auction item of a photography session which due to my wife’s failing health was delayed for over a year. When my wife died suddenly last summer, Mr. Davenport approached me in church to ask if perhaps I would like him to take pictures of the Memorial Service for my wife. It was such a thoughtful and appreciated gesture. He was so thoughtful and respectful and even with his failing health he approached me later to tell me he had found a second set of pictures from the event if I was interested and would not find them painful. If I can do anything to help you with the All Souls Memorial Service, I would be honored to do so. If you would like I can certainly take photographs of the service as he did for my wife’s. I shall remember always his quiet dignity and kindness.
Robert Bonner, August 4, 2007

Get all latest content delivered to your email a few times a month.